Last weekend I went along to Oi Polloi on Yarm High Street for the first time. I looked on their social media and discovered that they are the team that created The Dough Box, Lost Property and The Purple Pig. I’ve already reviewed Lost Property which was amazing and I used to love the Purple Pig too, they describe Oi Polloi as a little brother of Purple Pig so I was intrigued to visit!

If you’re after an overloaded burger that can barely fit in your mouth and you need two hands, plus a knife and fork then Oi Polloi is the one. After stalking their social media I knew I wanted a burger, they just looked epic and I’ve tried a few Purple Pig burgers back in the day and I wanted to see the difference.

I went for the Bacon Deuce burger, 2 x 4 oz burger pattys, melted jack cheese, crispy cured bacon, BBQ sauce, fries (in the burger), mustard mayo and garnished with candy bacon. It was massssive, a cut in half and hope for the best kind of job! Everything about the burger was cracking, the patty’s were juicy and meaty and you got two, the mustard mayo added a nice tangy flavour but then the cured bacon balanced everything out. The fries inside the burger was another extra touch that at first I wasn’t sure about but I ended up loving the combo. The candy bacon on top of the burger was unbelievable, I could of had a bowl of it easy. Not forgetting the chips on the side – they were a good chip! None of that frozen malark. 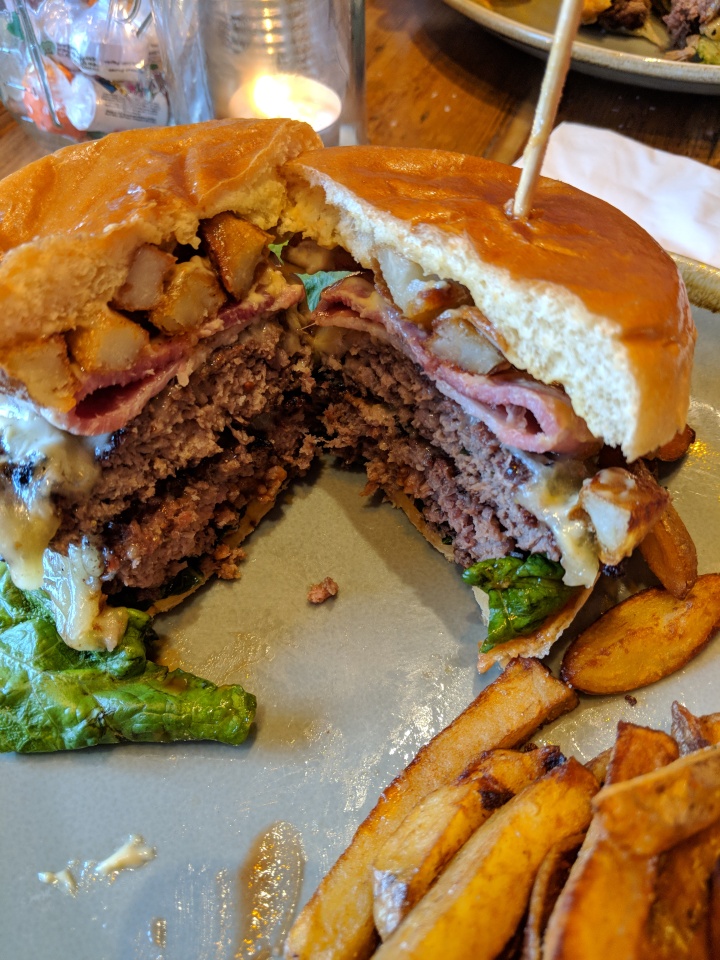 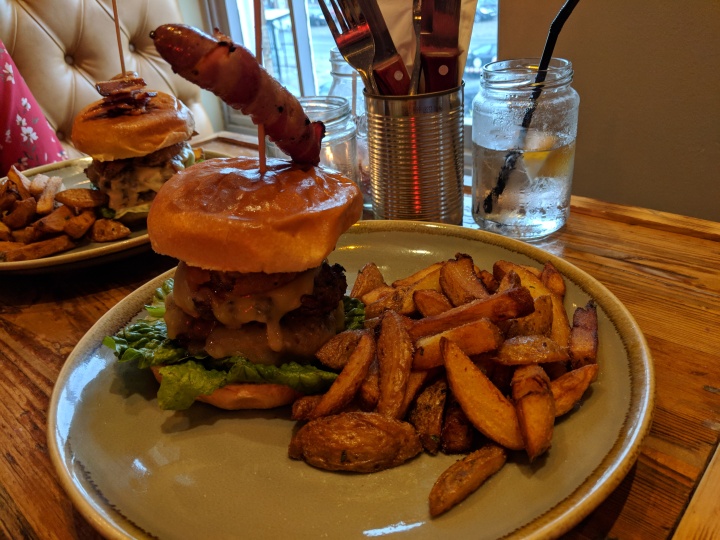 The boyfriend went for the Ye Ol’ Purple Pig Burger, 2 x 4 oz pattys, melted jack cheese, pulled pork, BBQ sauce, onion rings, baconnaise, lettuce, garnished with piggie smalls. He said it was messy but really good! Both of our burgers were £9 and came with fries too, which I think is amazing value.

I had a few cocktails and I remember the cocktails from purple pig and they were always really inventive and they always had a twist on the classic. I had ‘Pig Mistake…Huge’ it was a gin based cocktail and was my fave, ‘The Jam’ it had apricot jam swirled inside – delish and ‘Outcast’ which was brandy based, I wasn’t much of a fan of the last one but that’s just down to my own taste. There’s not millions to choose from which I always think is a good thing, it gets too hard to choose but there is something for everyone.

Thanks for inviting me along Oi Polloi! We were absolutely stuffed, but they have a variety of cheesecakes for dessert but we couldn’t fit it in (for once). They have veggie options, hotdogs, chicken burgers, chicken wings and much more on their menu too and their breakfast menu looks insane! They also have a Little People’s menu that is really good value, so if you need somewhere for the whole family I’d definitely recommend.

I’m going to have to go back for a few visits to try more. The evening was faultless, the staff were really helpful and it was such good value, a great all rounder!

I’m Sophie, an ordinary 25 year old living in Teesside with a large appetite.